You are here: Home » Articles » Concord Base Reuse Plan Departs From Suburbia

The City of Concord has chosen a preferred alternative plan for reuse of the shuttered Concord Naval Weapon Station that emphasizes transit-oriented development and job growth while designating 65% of the 5,000-acre site for open space and parks.

Base reuse planning still has a long way to go, but the City Council's selection of a preferred plan provides a milestone in a process that began in late 2006 (see CP&DR Local Watch, January 2007). The plan calls for approximately 12,300 dwelling units, 6.2 million square feet of commercial space, 710 acres of developed parks and a state university campus while leaving about half the site as open space that provides habitat and public recreation. The "clustered villages alternative" chosen by the City Council would center development around an existing BART station and four other nodes along a new transportation corridor.

"It isn't every day that you have a real blank slate that has an underutilized rapid transit station right adjacent to the site," said Michael Wright, Concord's community reuse planning director. The plan tries to capitalize on that asset with dense, mixed-use development that would provide workplaces for more than 20,000 people, as well as homes for many of those employees.

Although the preferred alternative has proponents inside and outside of City Hall  and the City Council voted 5-0 for the plan  there is opposition. Some environmental groups and the Concord Naval Weapons Station Citizen Alliance have advocated for designating 80% of the site as open space and decreasing the number of potential homes and office buildings. The City Council-appointed Citizens Advisory Committee supported the clustered villages plan with only a 10-7 vote, as the dissenters voiced concerns about traffic congestion. Meanwhile, Councilwoman Helen Allen has argued for less open space and a plan that reflects Concord's current land use pattern of single-family homes on large lots.

Allen said she voted for the clustered villages plan simply to keep the process moving forward. She called the plan uncreative, too urban and unrealistic.

"We are not truly urban, we are suburban. The rest of the city map that surrounds all of that [base] is single-family residential, median- and low-density," Allen said. "They want to stuff all these people into these high rises and force them to use BART. This transit-oriented development is something that exists in New York and Chicago and all the big cities that people want to escape when they come to California."

Beverly Lane, an East Bay Regional Park District director and member of the Citizens Advisory Committee, said she voted against the preferred alternative because it would permit too much development. Highway 4 and Ignacio Valley Road (a major thoroughfare from Walnut Creek to Pittsburg) are already jammed at peak hours, and the dense housing and office development would further clog roads, she said.

"The major issue that is out there is the density. Having an approval for potentially 28,000 more people is huge," Lane said. "For some of us, that density is unrealistic."

The Navy stopped using the inland 5,000 acres of the 12,600-acre weapons storage and maintenance facility in 1999. The Base Realignment and Closure Commission in 2005 recommended closing the inland portion of the base, and the Navy declared the property surplus in 2007. The Navy transferred a deep water port and the adjacent 7,600 acres to the Army. The surplus property lies within the Concord City limits, and the city three years ago proposed a general plan update that called for 13,000 housing and 15,000 jobs on half of the site, with the remainder used for parks and open space. When opposition arose, the city dropped the property from the general plan update and began a separate base reuse planning process in late 2006.

Environmentalists appear to be divided on the reuse plan. The group Save Mt. Diablo continues to press for designating 80% of the 5,028-acre site for open space and parks, and contends the proposed development "could create a traffic nightmare from East County to the Bay Bridge." However, Greenbelt Alliance Field Representative Christina Wong called the council's selection of the clustered villages plan "a good step forward." The plan, she said, "has the potential to be a model for smart growth development." 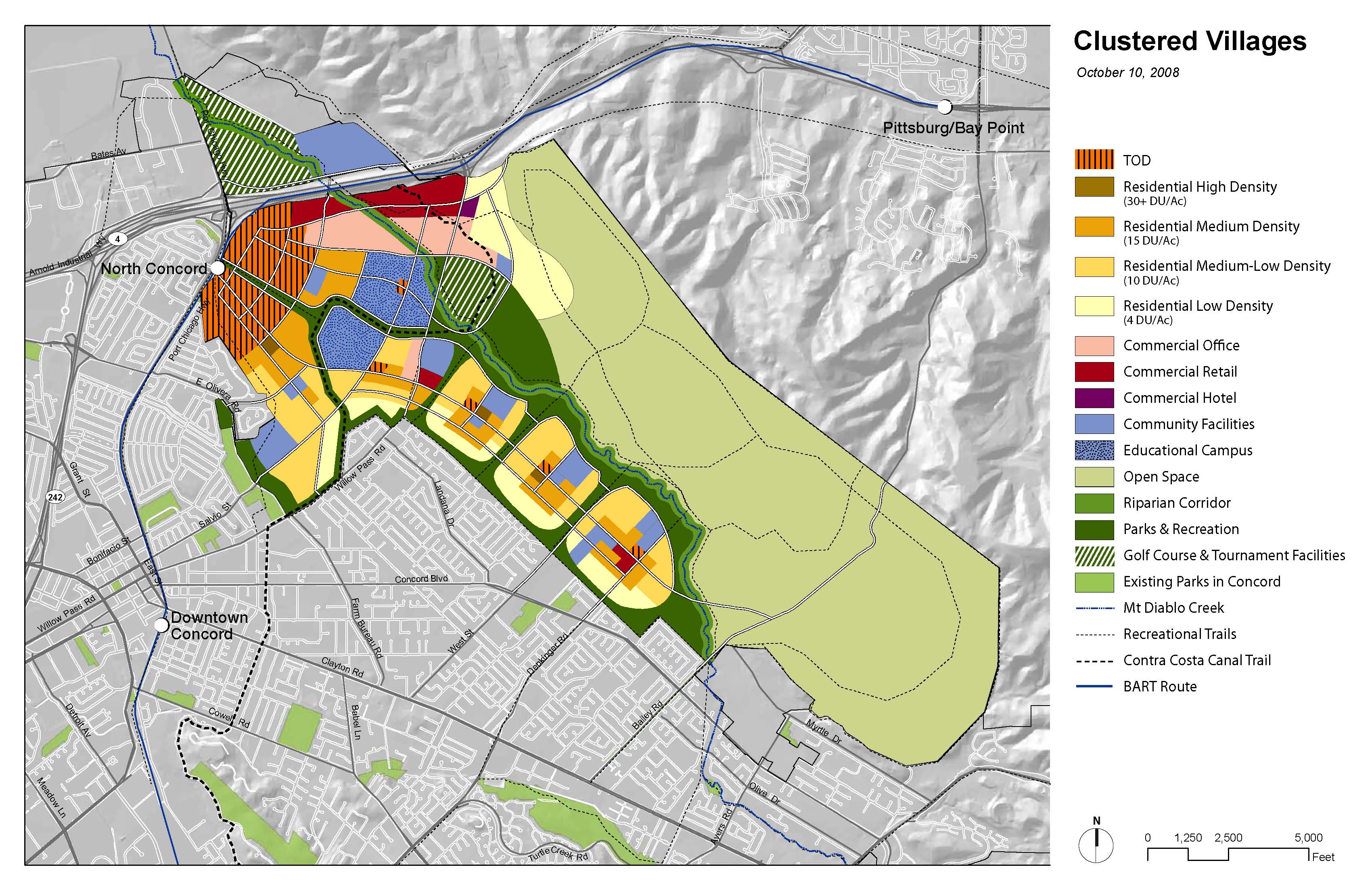 The plan appears mostly to satisfy the park district, which would get about 2,400 acres for a regional park, and California State University, East Bay, which is in line for 150 acres for an educational complex. The plan also calls for assessing developers a total of $38 million to fund housing, transitional facilities and services for homeless people  an aspect of the plan that Allen voted against.

The City Council chose the clustered villages approach over a "concentration and conservation alternative" that would have designated 64% of the site as open space and another 9% for parks and recreation. The rejected alternative would have permitted about 2,000 fewer housing units and 1.5 million fewer square feet of commercial development. The clustered villages plan's extensive developed parkland and potentially greater fiscal feasibility won favor with the council.

City Manager Daniel Keen, who has been with Concord for less than a year, said he sees broad community support for the clustered villages alternative. "There were an awful lot of interests that got involved early on, and that influenced the preferred alternative," he said.

Keen previously worked in Seaside, which is helping redevelop Fort Ord, and in Novato, where the former Hamilton Air Force Base is located. Both the Fort Ord and Hamilton reuse plans placed regional need ahead of local fiscal realities, he said. That is not the case with the Concord reuse, which the city is trying to make revenue-neutral, he said.

The plan does depart from existing development patterns in the Contra Costa County city of 125,000 people. Wright said the departure is the result of wanting to capitalize on the BART station, a desire to limit the development's carbon footprint, and advocacy by the attorney general's office. Indeed, a detailed letter from Deputy Attorney General Sandra Goldberg urged the city "to create a model mixed-use, transit-oriented community that provides a substantial contribution to achieving the state's GHG [greenhouse gas] reduction goals."

Plus, he said, because part of the base will eventually lie in a redevelopment project area, the city could pool tax increment and use the funds to enhance older parts of town and to create good road and bus connections between the newly developed base property and adjacent neighborhoods.

The city's priority for the next several months will be completing a revised draft EIR that focuses on the preferred alternative, said Wright. The City Council will likely vote on a final reuse plan in June or July, he said.

"We'll be preparing some more detailed planning studies that focus on the transit-related proposals on the site," Wright said. "We'll be putting together design principles that will help the council guide developers toward sustainable buildings, green buildings, a reduced carbon impact."

The city will also draft a preferred disposition strategy for the Navy to review. Two years ago, the Navy strongly considered handing the Concord base property to Shaw Environmental & Infrastructure, Inc., a Virginia-based military contractor, in exchange for construction of military housing and infrastructure elsewhere. Under pressure from members of Congress, the Navy backed away from the Shaw offer but it has never announced exactly how it will dispose of the property. The city's plan assumes that the Navy will give 60% to 65% of the site to the city or other public agencies, primarily for parks and open space. The remaining acreage would be auctioned to developers in a process that could generate more than $1 billion for the Pentagon.

The Navy needs to adopt an environmental impact statement and complete endangered species act consultations with federal agencies before making any conveyance decisions  a process that could easily take more than a year. The Navy also needs to address the level of cleanup that will be necessary to convert the former weapons storage facility to civilian uses. Only then could auctions begin. At that point, having a good plan with strong community backing becomes even more important, said Keen.

"When you get to the stage where you are ready to sell property to developers, that's when you really get pressure to change the plan," Keen said.

Which is exactly what Allen, a plan opponent, is counting on. "The market is what really drives this," she said. "It's not going to end up like the plan shows now, so why fight it?"