Wilshire Boulevard is the Main Street of Los Angeles, and the Ambassador Hotel (1921-2006) was its biggest, swankiest, classiest address. Filling 24 acres in one of L.A.'s densest neighborhoods, the Ambassador was a vestige of the age when men wore tuxedoes to dinner, women wore beaded gowns and large hats that nearly covered their eyes, and both drank too much. "Gone with the Wind" swept the Oscars when the Academy Awards were handed out at the Ambassador in 1939. Roosevelt slept here; so did JFK. His younger brother, Sen. Robert Kennedy, was assassinated in the kitchen of the Embassy Ballroom in 1968. ï¿½

Beyond history, the spacious layout of the old hotel still impresses, even though it has been largely, if not totally, demolished. The Wilshire lawn, nearly 300 feet deep, is larger than many neighborhood parks. At the far end of the lawn, standing nearly at the center of the property, was the hotel "tower," in actuality a long, horizontal faï¿½ade with a slight inward curve that seemed to embrace Wilshire Boulevard with its broad shoulders.

After nearly two decades of false starts and lawsuits ï¿½ this is not the place toï¿½ drag out the stories about a huckster named Trump, his plans for the "world's tallest building," and his protracted court battle with the Los Angeles Unified School District ï¿½ construction has finally started on the scheme to convert the property into an education center (see CP&DR In Brief, February 2008). The undertaking is big: The master plan calls for three separate schools (K-3, 4-8, 9-12) in a working class neighborhood with an expected attendance of more than 4,100 students. And when we reconcile ourselves to the loss of most of the original structures, rightly mourned by preservationists but untenable as the basis of new buildings, we can begin to recognize that the master plan by Pasadena's Gonzalez-Goodale is sensitive and workable, even inspired at certain points.ï¿½ï¿½ ï¿½

Following design guidelines in the project EIR, the architects preserved several vestiges of the historic hotel, including the large sign on Wilshire Boulevard, the deep Wilshire lawn and the Embassy Ballroom, where the curving ceiling beams overheadï¿½ will be restored to their original state, circa 1928. The Cocoanut Grove, which juts in front of the hotel tower like the drawer of an open cash register, has a plain, new wrapper around the flamboyant nightclub designed by the late Paul Williams, one of L.A.'s best-known African-American architects. 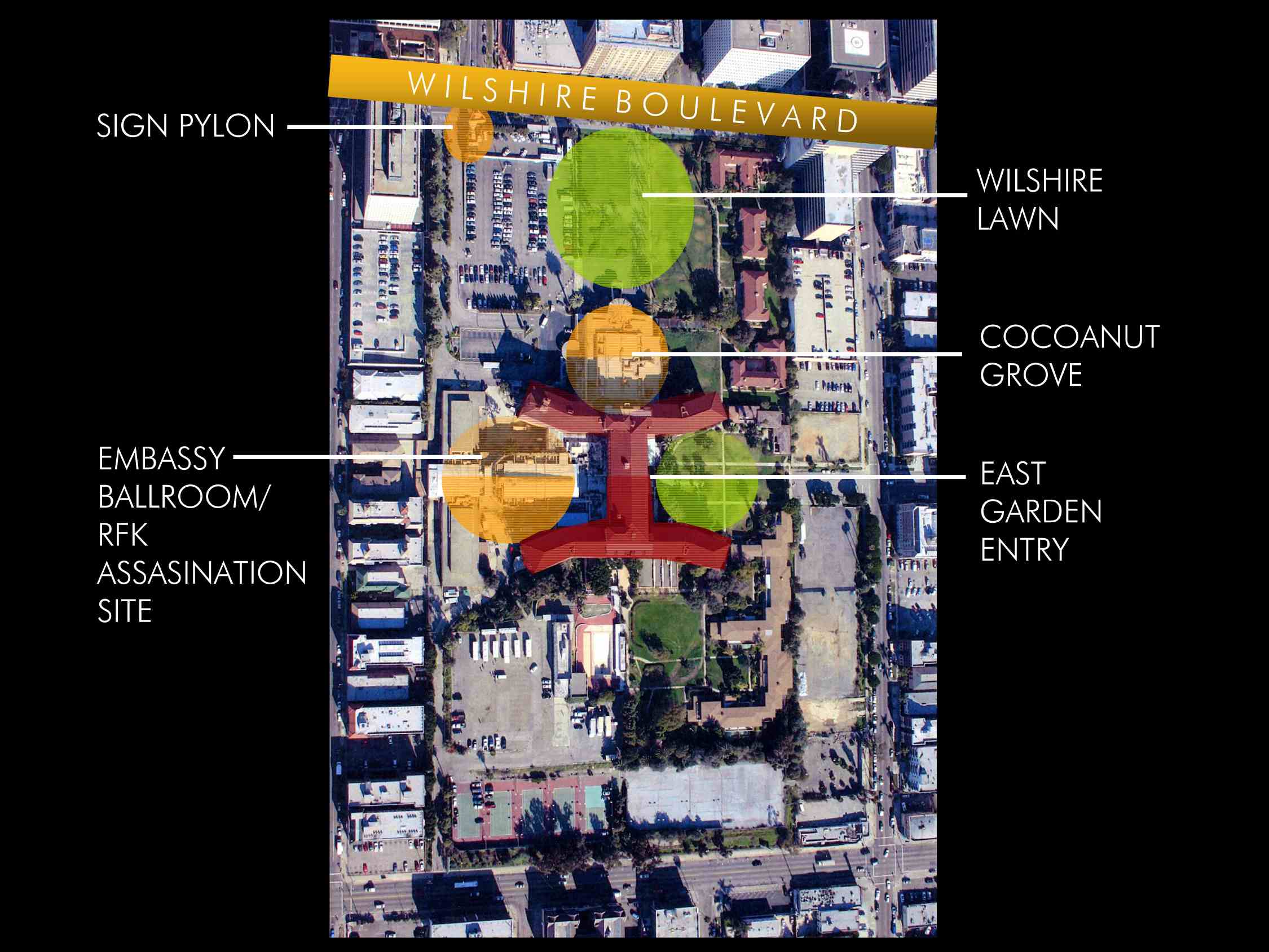 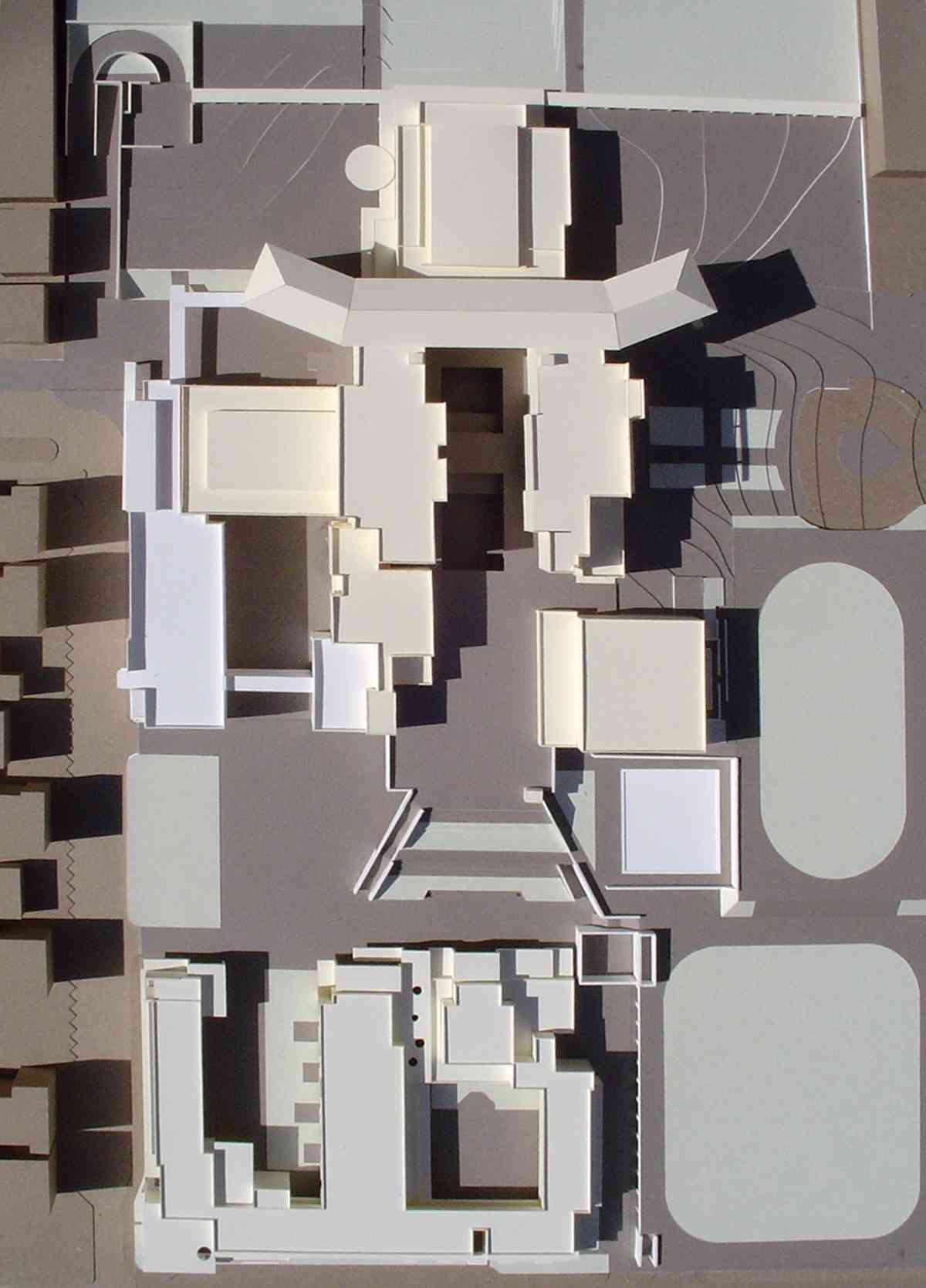 At top is a view of the original Ambassador Hotel indicating which historical features architects want to emulate or preserve. At bottom is the school layout that places the high school in the center of the site, with the junior high school at left and the elementary school below. (Source: Gonzalez-Goodale Architects)

Although the hotel tower is gone, the architects have honored its memory with a new building nearly identical in both shape and position. This new building, which is the rear of the new high school, has a row of large windows to soak up the northern light. The style of the new building is simpler and less ornate than the original Ambassador tower. The basic effect of the embracing building has been preserved, even if we miss the tawny reddish color of the Ambassador tower.

The preserved Wilshire lawn in this scheme becomes a group of sports fields, including a regulation-size soccer field. This is good news for Wilshire Boulevard, a tightly packed street that benefits enormously from the way the Wilshire lawn opens up and provides a great breath of air amid the high-rise and mid-rise buildings on either side. This solution also beats the hell out of an earlier proposal, from different designers, of building a football stadium on the lawn, with a quarter-mile of bleachers facing Wilshire Boulevard. (Pause for a moment and envision that.)ï¿½ ï¿½ 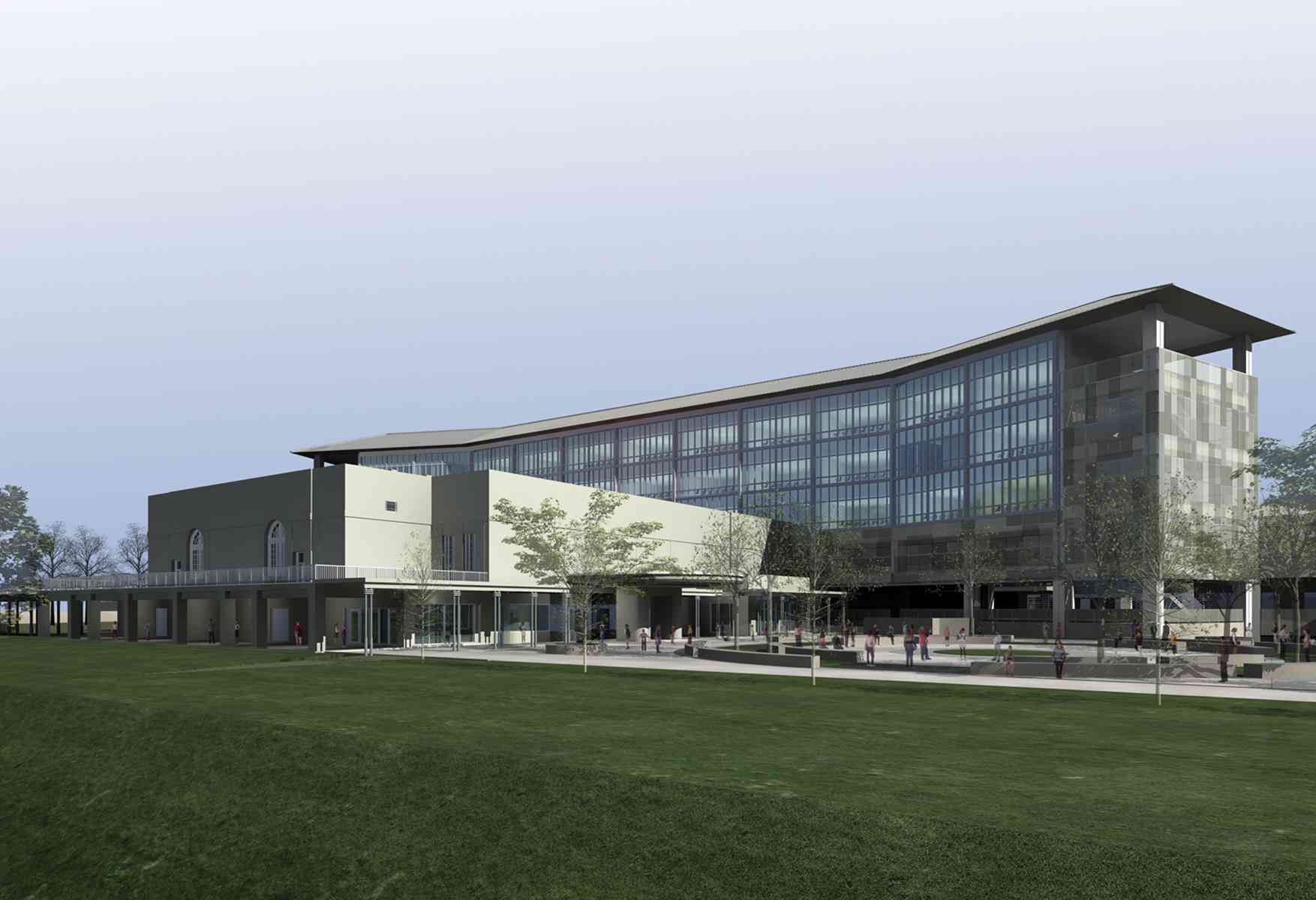 This rendering shows that the new high school building preserves the size and shape of the original Ambassador tower. The Cocoanut Grove is the building at front left.

The design also includes a new park along the Wilshire Boulevard sidewalk. The park is a narrow strip of ground carved out of the Wilshire lawn, which is elevated several feet above the sidewalk. If the boulevard is the least important street in the life of the new schools, pedestrians walking along L.A.'s Main Street will have a more pleasant time walking down the Ambassador block than in the past.

In an equally sensitive mode, the architects have helped preserve the original lawn-and-tower gestalt of the Ambassador Hotel by hiding the high school and middle school behind the long replacement building.

This configuration of the school buildings allows the architects to exploit the existing slope of the Ambassador site as a means to separate the schools. The high school, located on the site of the original torso of the hotel, stands on the highest elevation of the site. Several yards to the south, the middle school sits on its own level.ï¿½ The elementary school, on the southern edge of the hotel block, sits on the lowest level.

To minimize the crush of cars at the start and end of school days, each school has its own separate "loading zone" located at points where streets dead-end into the Ambassador block.ï¿½ We will see whether neighbors are annoyed by the traffic or not. At least Wilshire Boulevard will not get backed up with parents dropping off children, which would be harmful to surrounding merchants and office buildings, and might discourage future investment on the faded boulevard. 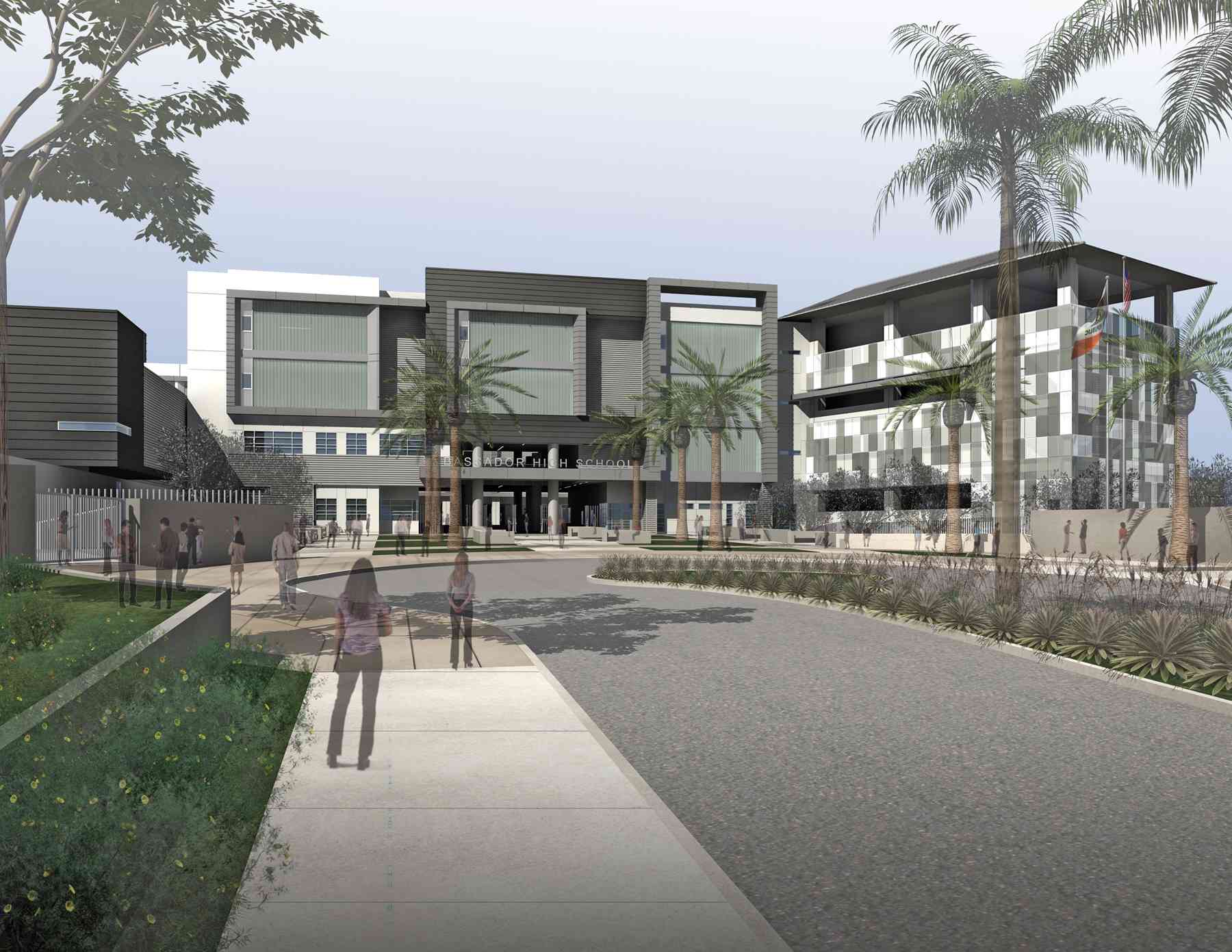 The front entrance to the high school faces west, onto Seventh Street.

In architectural style, the school buildings are modern if institutional in appearance. The architects have not gone the route of bright colors and swirling shapes that other designers have recently adopted to "liven up" recent school projects by making them look like casinos or mini malls. The elevations look good on paper; hopefully the buildings will look equally good, or better, on the ground. The architects and their consultants, however, are building schools on a public works budget, not a pleasure dome for Jay Gatsby.

The present reality of Wilshire Boulevard is more prosaic than in decades past. If we have lost the Ambassador, this scheme provides an inner-city neighborhood with the schools it needs, while preserving some of the customary elegance, and a great breath of air, on Wilshire Boulevard.


For FULL ACCESS to all our premium content - Subscribe Online Today!
(If you're not a subscriber premium articles can be purchased for just $5 each by visiting our online Single Purchase Store)